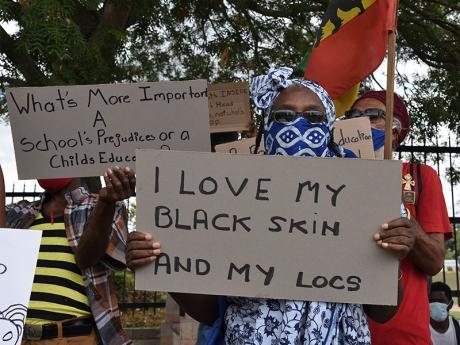 Several Rastafarians today staged a peaceful protest in front of the head offices of the Ministry of Education. The Rastas say they are fed up with the discrimination meted out to children with dreadlocks by school administrators.

Fuelled by a recent court ruling that stated that the constitutional right of a seven-year-old child was not violated when she was refused acceptance two years ago at  Kensington Primary School in Portmore, St Catherine, because her parents, Dale and Sherine Virgo, refused to remove her dreadlocks, the Rastafarians are now calling for an immediate adjustment to the law and regulations governing public education.

“We are here in solidarity with the young Virgo, and not just her, but Rasta children in general, because every year they put up a resistance towards Rastafari children or children with locks,” said Yvonne Hope, one of the chief organisers.

“Over the years it has just been a fight, and enough is enough,” she fumed.

The protesters hoisted placards as they called for Jamaicans to respect their dreadlocks.

“The Ministry of Education has a responsibility to level the playing field for all our children,” said Carol Narcisse, one of the protesters.