'If you can't hear, you will feel' - PM Holness 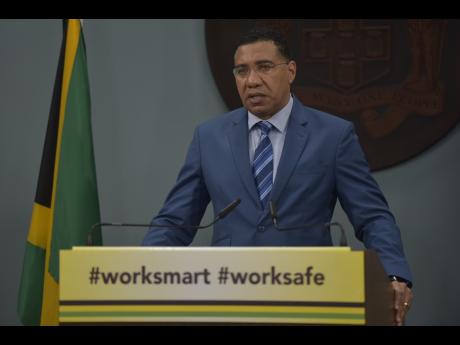 Prime Minister, Andrew Holness, on Thursday, warned that stricter measures to contain the spread of COVID-19 are coming, following another spike in new cases within 24 hours, totaling 30, pushing Jamaica’s tally to 958.

He made the announcement during a digital press briefing at the Office of the Prime Minister Media Centre in Kingston, where he also reported that 745 persons have recovered from COVID-19, leaving 149 active cases.

Mr. Holness said consequent on the recent uptick in cases, which has been a cause for concern, and the flouting the safeguards and protocols by persons in different areas, the COVID-19 Sub-committee met on Thursday and has decided to institute stricter measures for churches, funerals, the entertainment sector, and beaches, details of which he said will announced shortly.

“I’ve always said that if the situation warrants it, then we will have to extend existing or implement new restrictive measures. We have spent a lot of time and effort and resources on moral suasion, asking you the citizens, appealing to your good conscience and your reasonableness, to observe the protocols. With what is happening now, I think we are at the limit in moral suasion,” the Prime Minister said.

“So, where we are now is that we’re going to move into a different phase of the management of the pandemic, that is strict enforcement because it is now clear to us that, despite our best efforts and despite the best efforts of the majority of Jamaicans, as my grandmother said to me when I was a child, ‘If you can’t hear, you will feel’,” he added.

Regarding the latest confirmed cases, Mr. Holness advised that 26 are new samples while four are part of the backlog.

Nineteen are females and 11 are males, with ages ranging from six to 87 years.

The Prime Minister indicated that four of the 30 are imported cases, with addresses in St James (three) and Clarendon (one).

Five of the 26 are contacts of confirmed cases, while 21 are under investigation.

Of the overall cases, 352 are imported, 278 are contacts of confirmed cases, 62 are local transmission cases not epidemiologically linked, 236 are related to the workplace cluster in St Catherine, and 30 are under investigation.