Tropical storm Isaias whips up eastern US, killing at least 6 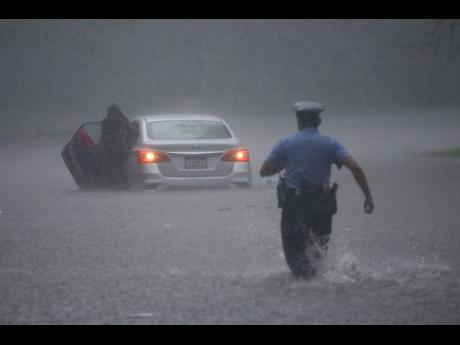 A Philadelphia police officer rushes to help a stranded motorist during Tropical Storm Isaias, Tuesday, Aug. 4, 2020, in Philadelphia. The storm spawned tornadoes and dumped rain during an inland march up the U.S. East Coast after making landfall as a hurricane along the North Carolina coast. (AP Photo/Matt Slocum)

WINDSOR, N.C. (AP) — At least six people were killed as Tropical Storm Isaias spawned tornadoes and dumped rain Tuesday along the U.S. East Coast after making landfall as a hurricane in North Carolina, where it caused floods and fires that displaced dozens of people.

Two people died when Isaias spun off a tornado that struck a North Carolina mobile home park. Another person died in Pennsylvania when their vehicle was overtaken by water and swept downstream. Two others were killed by falling trees toppled by the storm in Maryland and New York City, and a sixth person died in Delaware when a tree branch fell on them, authorities said.

Isaias sustained top winds of up to 65 mph (105 kph) more than 18 hours after coming ashore, but it was down to 45 mph max winds as of 10:50 p.m. EDT Tuesday, according to the National Hurricane Center. The storm’s center was about 45 miles southeast of Montreal, moving northeast into Canada at about 38 mph (61 kph).

In eastern Pennsylvania, a 44-year-old Allentown woman was killed after encountering high waters on a street in Upper Saucon Township that swept her vehicle downstream Tuesday afternoon, the Lehigh County coroner’s office said.

While in New York City, a massive tree fell and crushed a van in the Briarwood section of Queens, killing Mario Siles, a 60-year-old construction contractor who was inside the vehicle, police said. A woman in Mechanicsville, Maryland, died when a tree crashed onto her car during stormy conditions, said Cpl. Julie Yingling of the St. Mary’s County sheriff’s office.

In Delaware, authorities said a woman was outside assessing storm damage when she was hit and killed by a falling tree branch.

Before making landfall late Monday, Isaias killed two people in the Caribbean and battered the Bahamas before brushing past Florida.