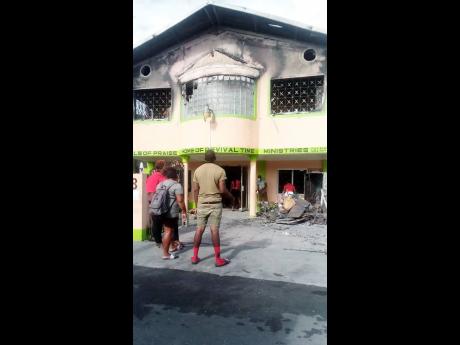 Bishop Dr G.G. Cooper is requesting prayers after the Revival Time Ministries on Morrison Street in Spanish Town was ravaged by a fire.

According to reports, the fire started about 5 a.m. on Monday and multiple fire units were alerted. The two-story church building was left in a dilapidated state, leaving many onlookers in shock.

Cooper, who is the international presiding bishop of the Apostolic Church of God Seventh-day Worldwide Fellowship, was born in Jamaica and migrated to Canada where he became a citizen.

"Just pray for us and all will be fine," Cooper told THE STAR team when he was contacted yesterday.

An official at the Spanish Town Fire Station said, "We can confirm that the unit responded ... it was actually three different area units including Portmore and Spanish Town that responded to that fire."

In March, the Power and Authority of Jesus Ministry Church in Denbigh, Clarendon, was completely burnt to the ground, destroying an estimated $2 million worth of equipment and appliances.