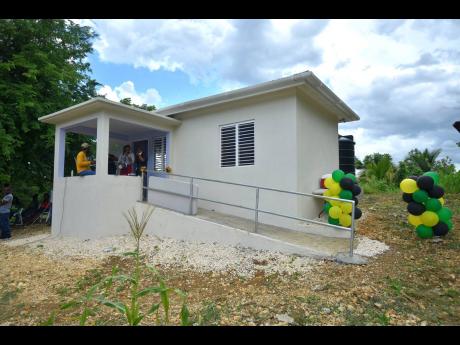 The one-bedroom house that was handed over to St Elizabeth resident, Winston Wint, on July 17, under the Government’s New Social Housing Programme. 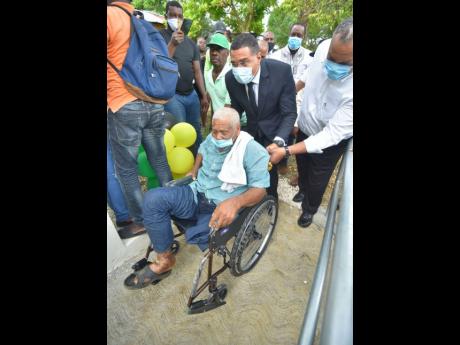 Prime Minister Andrew Holness (centre) pushes the wheelchair with Winston Wint up the ramp leading into his one-bedroom house, which was handed over in Bogue district, St Elizabeth, on July 17. To the prime minister’s left is National Director of the New Social Housing Programme Danville Walker.
1
2

Danville Walker, the national director for the New Social Housing Programme (NSHP), has defended the $5.9 million price tag for a one-bedroom house that was recently constructed by the state entity. An 88-year-old amputee, Winston Wint, in Bogue district, St Elizabeth, on July 17 was handed the keys to the house, but the discussion about it has been more about the cost than the fact that he now has a decent place to call home.

"I've seen some of the comments on social media, and quite frankly, I know the cost of [the] building. The alarm may be from persons who are not really familiar with the cost of building. A one-bedroom house with a living and kitchen area can cost you $6 million," Walker told THE STAR.

Wint's house has a living area, kitchen, a bathroom and septic tank, and has connection for potable water and electricity.

"What was unique about this particular house is we put in a wheelchair ramp and also, the house is on a hill. We have to build these homes where the recipient has access to land. The terrain is different for almost every single house. One of the challenges we had is that there is no water or light in that area, so we have to truck water to it," he said of the Bogue district unit.

Walker said that it appears people are comparing the construction price of the homes under the NSHP to construction in many housing developments.

"You can put 100 houses down in one area and you pretty much have them built like an assembly. And when you look at the unit cost of one of those homes, it is much cheaper because you actually pour the house," he said in reference to prefabricated houses.

"You build a framework and you pour the cement in that frame and when you pull the frame, the house is standing there. Then you go through and put the roofs on all of them and you simply finish the houses. You cannot compare a house like this to one of those houses. It's block and steel ... not poured concrete, which is much cheaper," he added.

The NSHP director said he understands the alarm about the price, but stressed that the cost of the house is in keeping with reality.

"At the beginning of this programme, we were given guidelines as to what to spend. The engineers and the quantity surveyors gave us what a one-bedroom, two-bedroom or a three-bedroom involves, and we made sure we stayed below that," Walker said.

Some $22.7 million was spent upgrading a tenement yard in Annotto Bay, under the programme. Three sisters were the beneficiaries of three attached two-bedroom units with bathrooms and other amenities.