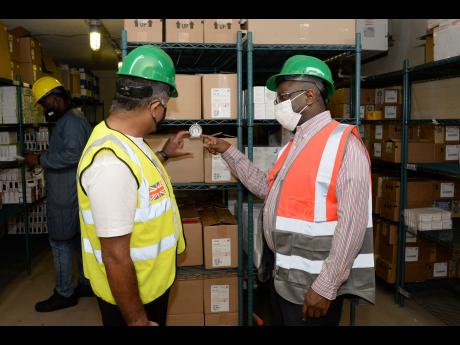 British High Commissioner to Jamaica, His Excellency Asif Ahmad (left), and National Health Fund (NHF) Chief Executive Officer, Everton Anderson, examine several boxes of medication, which the Government procured in the United Kingdom through the NHF, and shipped to Jamaica with the High Commissioner’s assistance, in tandem with the Ministry of Foreign Affairs and Foreign Trade. The supplies are being stored at the NHF’s pharmaceutical warehouse in Kingston, which they toured on Wednesday (June 3). 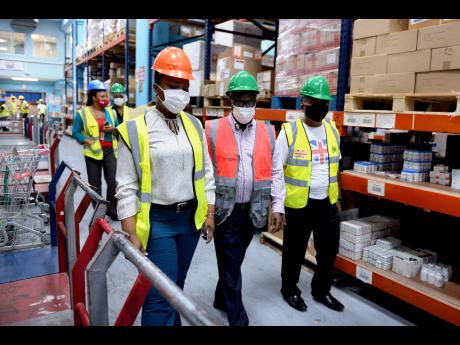 The Government has received a shipment of medication, valued at nearly $100 million, which was sourced from suppliers in the United Kingdom (UK) through the National Health Fund (NHF).

Inclusive of drugs for mental health, heart conditions, cancer, and other chronic illnesses, the shipment arrived on Tuesday, and is being stored at the NHF’s pharmaceutical warehouse in Kingston, for distribution across the public health system.

The shipment was facilitated through the collaborative efforts of the Ministry of Foreign Affairs and Foreign Trade, and the British High Commissioner to Jamaica, His Excellency Asif Ahmad, who was instrumental in initiating arrangements with UK-based TUI Airlines to transport the supplies, which had been delayed due to the coronavirus pandemic.

The High Commissioner, accompanied by NHF Chief Executive Officer (CEO), Everton Anderson, visited the agency’s warehouse on Wednesday, to view the supplies as well as the facility’s general operations.

Mr. Ahmad said the assistance, extended through the British High Commission in getting the supplies to Jamaica, “was something we wanted to do.”

The High Commissioner said he was especially grateful to TUI, “because when they heard that I was willing to dip into our cash pool here to fund the transfer of these pallets [of medication], they said ‘never mind, use that money for something else… and we will let you bring the pallets over’.”

He pointed out that the acquisitions are essential medicine that will be central to treating persons, particularly the elderly, whose health has been compromised by COVID-19 or who are afflicted by other ailments.

The High Commissioner advised that he will be looking to channel the over £30,000 that was earmarked to cover the cost for shipping the medication to Jamaica into key areas of engagement.

These, Mr. Ahmad indicated, include working in partnership with the private sector in creating safe workplace arrangements for Jamaicans returning to work and exploring new entrepreneurial opportunities resulting from the pandemic for those persons returning home from the UK and other countries.

Mr. Ahmad said he is pleased with the tangible outcomes resulting from the UK’s interventions to assist Jamaica’s national COVID-19 response.

Meanwhile, Mr. Anderson said the NHF and the Government “are happy for the help of the British Government, and the High Commissioner in particular,” in getting some of the much-needed items out of the UK “that we have been waiting [on] for several weeks”.

“The High Commissioner was so gracious in helping us to get these items… [as also] the Foreign Affairs Ministry… which are critically needed in the health sector to serve our patients in the various communities. I thank you… for this much-needed intervention,” the CEO said.