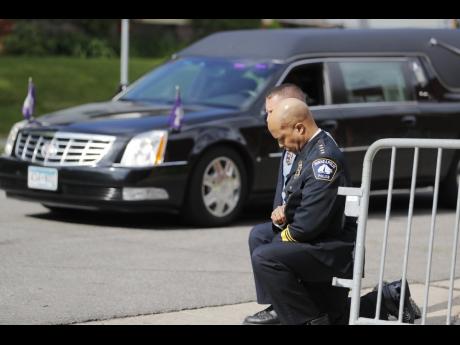 MINNEAPOLIS (AP) — Hollywood celebrities, musicians and the politically powerful filed into a sanctuary in front of the golden casket of George Floyd for a memorial service Thursday as mourners began a three-city farewell to the man who was anonymous in life but sparked global protests for justice in death.

The service was held at North Central University for the 46-year-old out-of-work bouncer, who died May 25 after a white police officer put his knee on Floyd’s neck as the black man lay handcuffed on the pavement, gasping that he couldn’t breathe.

From coast to coast, and from Paris and London to Sydney and Rio de Janeiro, his death has set off turbulent and sometimes violent demonstrations against police brutality, racism and inequality.

“He was a human being. He had family, he had dreams, he had hopes. The real duty of one with this type of assignment is to underscore the value of the human life that was taken, which gives the reason the movement was occurring,” the civil rights leader the Rev. Al Sharpton said ahead of the gathering.

Inside the sanctuary, the casket was flanked by white and purple flowers, and an image was projected above the pulpit of a mural of Floyd painted at the street corner where he was pinned to the pavement by police. The message on the mural: “I can breathe now.”

The sanctuary normally seats 1,000, but because of the coronavirus outbreak, the capacity was reduced to about 500, and mourners wore masks.

Memorials to Floyd are set to take place in three cities over six days: After the Minneapolis event, his body will go to Raeford, North Carolina, where he was born, for a public viewing and private family service on Saturday.

Next, a public viewing will be held Monday in Houston, where he was raised and lived most of his life.

Then a 500-person service will take place Tuesday at the Fountain of Praise church.