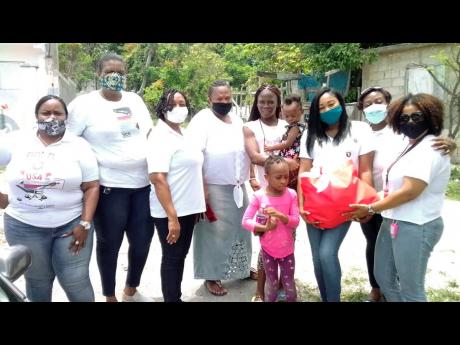 Shantel Brown, (centre) is seen here with her two daughters, Tayler and Cory-Ann, while being presented with several items from the Region 4, Quality Education Circle 36 arm of the Ministry of Education.

Last Saturday was Tayler McLeod's birthday. She turned two, and had it not been for a deadly fire last November, her twin brother, Tyler, would have celebrated his second birthday as well.

The incident is still fresh in the mind of Shantel Brown, the children's mother, who was overcome with emotions last Saturday when the Ministry of Education's Region 4 Quality Education Circle 36 team threw a birthday party for Tayler.

The Circle team is made up of 17 western schools and focuses on development. The team presented the family with packages of food, toiletries and telephone credit.

Could have been killed

"These ladies have made my day, because today is my baby girl birthday, and I want to thank God that she is here with me today," Brown said. "She could have been killed in that fire that took my two sons away."

Flashing the occasional smile as she held her daughters, Tayler and Cory-Ann close, Brown said that she was thankful for the support as she and her two remaining children have not recovered from that disaster.

"I am so pleased," Brown stated, with tears of joy running down her cheek.

Brown said that she cannot stop thanking Cory-Ann, six, for pulling Tayler from the burning house. On that eventful day last November, Cory-Ann ran from the blazing house, dragging her sister with her.

She could not make it back inside, and both her brothers were burnt alive by the inferno. The charred remains of Javanchi were found on a bed, while Tyler's burnt body was discovered underneath the bed.

Brown was charged with neglect. The matter is before the court.