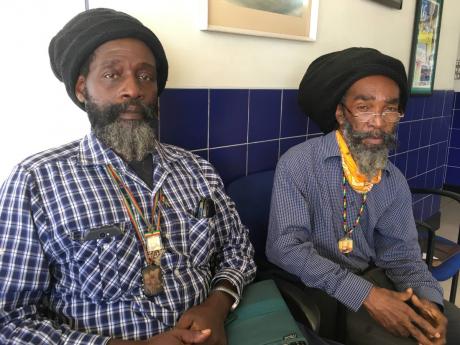 Christopher Graham (left) and Junior Anderson are advocating for one of their Rastafarian role models to be buried in National Heroes Park.

Members of the Rastafarian community are advocating for the late Abuna Ammanuel Ascento Foxe to be respectfully laid to rest at National Heroes Park.

Foxe, who led countless campaigns for the rights of Rastafarians, died in the US on April 20. He had been undergoing a series of treatments for a while.

After passing away six days before his 84th birthday, his body was transported back to Jamaica.

"Abuna Ammanuel Ascento Foxe was the international president of the Imperial Ethiopian World Federation (IEWF). He was also the overseer of the Church of Haile Selassie. Him build five churches in Jamaica, London, America, Barbados and Trinidad and Tobago. He's the man weh fight fi the liberation of Ethiopia," Christopher Graham, priest of the Church of Haile Selassie, told THE STAR.

Foxe had been a Rastafarian activist for more than 50 years. As a result, his brethren believe that he needs to be buried at National Heroes Park, something they believe would constitute a respectful send-off.

"Him carry Jamaican government to the Supreme Court fi establish Rastafarianism as a religion and win. He established Haile Selassie basic school, a wellness centre and other institutions. The things weh him accomplish in Jamaica and worldwide for the Rastafarian community, he deserve that honour. Abuna was instrumental in stopping the discrimination against Rasta," Graham added.

In 1995, Foxe was given the Meritorious Service Award from the Church of Haile Selassie for his international ambassadorship.

Junior Anderson, first vice-president of the IEWF Incorporated, says burying Foxe anywhere other than Heroes Park would be an affront.

"Other people who have had less contributions have been buried there. His contribution to Jamaica is profound. It would be disrespectful if he doesn't get this honour," Anderson said. "We have written a letter to the prime minister, (culture minister) Olivia 'Babsy' Grange, and also to Mark Golding, former minister of justice."

Graham said that if Foxe is not buried in the park, he would see it as a form of religious and political discrimination.

"Them never give him no recognition before ... he got no form of recognition while he was alive. And historically, no other man in Jamaica do weh him do," he said.

Grange confirmed to THE STAR that she received a letter from the Church of Haile Selassie, and "I'm about to respond to them".