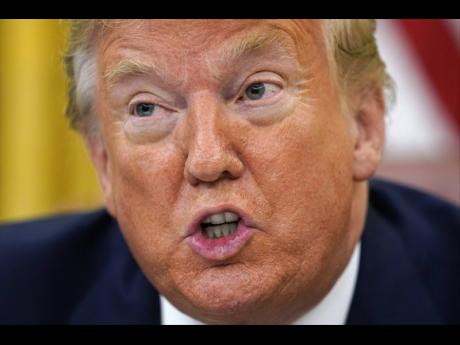 President Donald Trump speaks before signing an executive order aimed at curbing protections for social media giants, in the Oval Office of the White House, Thursday, May 28, 2020, in Washington. (AP Photo/Evan Vucci)

WASHINGTON (AP) — President Donald Trump on Friday threatened to take action to bring the city of Minneapolis “under control,” calling violent protesters outraged by the death of a black man in police custody “thugs” and saying that “when the looting starts, the shooting starts.”

Trump’s tweet — which was flagged by Twitter for violating rules about “glorifying violence” — came after protesters torched a Minneapolis police station, capping three days of violence over the death of George Floyd, who was captured on video pleading for air as a white police officer knelt on his neck.

Trump said he’d spoken to the state’s Democratic governor, Tim Walz, and “told him that the Military is with him all the way.”

“Any difficulty and we will assume control but, when the looting starts, the shooting starts,” he wrote in the tweet.

Trump didn’t clarify what he meant — Walz has already activated the National Guard — but the tweet drew another flag from Twitter, which did not remove the message, but added a warning label that prevents it from being shared or liked.

Slapping back, the White House reposted the message on its official Twitter account Friday morning. But Twitter quickly flagged that tweet as well, accusing the White House of promoting violence. White House social media director Dan Scavino turned the tweets into an image that he tweeted out as well.

The move came a day after Trump signed an executive order challenging the site’s liability protections as he accuses it of stifling conservative voices.

Trump, who has often remained silent in the aftermath of police-involved killings and has a long history of defending police, has been uncharacteristically vocal this week, saying earlier Thursday that he felt “very, very badly” about Floyd’s death and calling video capturing his struggle “a very shocking sight.”

But his language grew more aggressive as violence boiled over in Minneapolis on Thursday night. “These THUGS are dishonoring the memory of George Floyd, and I won’t let that happen,” he wrote shortly before 1 a.m.

“During these times, we can condemn violence while also trying to listen, to understand, to know that there is deep frustration, rightfully so, in our country -- that there has not been enough action on creating equality, opportunity, and in health care, and in a time of this COVID-19 epidemic, it’s laid bare all of that,” he said.