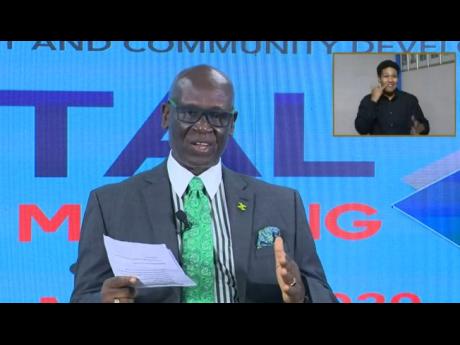 Minister of Local Government and Community Development Desmond McKenzie, says the island’s municipal corporations will be rolling out the first phase of their disaster risk mitigation programme in two weeks, for the 2020 Atlantic Hurricane season, which begins on June 1.

Speaking at a digital town hall meeting on Thursday, McKenzie informed that the programme is geared towards the comprehensive cleaning of drains and gullies managed by municipal corporations.

He said the initiative will coincide with a national drain-cleaning programme announced by Prime Minister Andrew Holness, during a virtual meeting of the National Disaster Risk Management Council, on Wednesday (May 27).

“The municipal corporations are now in the process of rolling out the first phase of their mitigation programme, which is to commence shortly… [and] will be supported by the National Works Agency,” McKenzie said.

Meanwhile, the Minister issued a strong appeal to members of the public to stop the thoughtless act of dumping garbage in gullies and drains, which contributes to extensive flooding during the rainy season.

“Government can’t be pressured to maintain drains and gullies and then the same people who are pressuring Government are the same ones that are depositing their garbage in the drains and in the gullies… . It is a general disorder across the country,” he said.

McKenzie said that the Government is in the process of strengthening the country’s anti-litter laws, which will impose stronger penalties, including higher fines for illegal dumping.

“The laws that are on the books are not punitive enough. It takes a little time, and we are actually working out the final draft of this new law to try to curb this act of indiscipline. It is taking some time, but we have to ensure that whatever we are doing, it is punitive enough to force persons to desist from doing what they are doing,” the Minister emphasised.

Additionally, he pointed out that a virtual meeting will be held with the island’s Mayors and Parish Disaster Coordinators, “to look at how extensive and how advanced the plans are for the upcoming hurricane season”.

Discussions at the meeting focused on the 2020 Atlantic Hurricane Season and the Government’s ongoing response to the novel coronavirus (COVID 19).