Minneapolis cop who knelt on man’s neck charged with murder 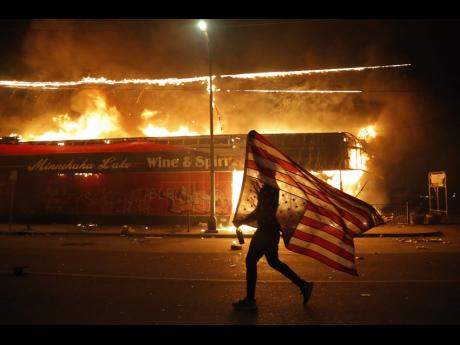 A protester carries a U.S. flag upside, a sign of distress, next to a burning building Thursday, May 28, 2020, in Minneapolis. Protests over the death of George Floyd, a black man who died in police custody Monday, broke out in Minneapolis for a third straight night. (AP Photo/Julio Cortez)

MINNEAPOLIS (AP) — The Minneapolis police officer who was seen on video kneeling on the neck of George Floyd, a handcuffed black man who died in custody after pleading that he could not breathe, was arrested Friday and charged with murder.

Hennepin County Attorney Mike Freeman said Derek Chauvin was charged with third-degree murder and manslaughter, after the office gathered enough evidence to prove the case beyond a reasonable doubt.

Freeman did not have immediate details, but said a criminal complaint would be made available later. The charges come after three days of protests, which had been escalating in violence.

Public Safety Commissioner John Harrington said state investigators arrested Derek Chauvin, who was one of four officers fired this week, but he did not provide details. The state attorney who would oversee any prosecution on state charges, whose home was also the site of protests, was scheduled to provide an update later Friday.

News of the arrest came moments after Minnesota Gov. Tim Walz acknowledged the “abject failure” of the response to this week’s protests and called for swift justice for officers involved. Walz said the state would take over the response to the protests and that it’s time to show respect and dignity to those who are suffering.

“Minneapolis and St. Paul are on fire. The fire is still smoldering in our streets. The ashes are symbolic of decades and generations of pain, of anguish unheard,” Walz said, adding. “Now generations of pain is manifesting itself in front of the world — and the world is watching.”