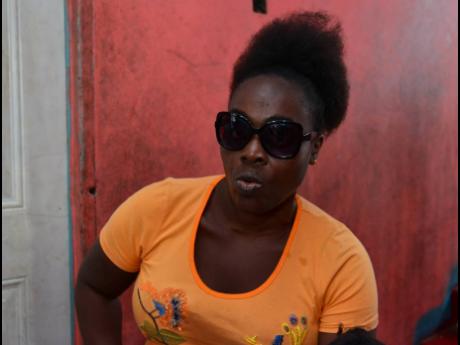 A monument titled 'Lest We Forget' is positioned at the front of Tivoli Gardens, in memory of 31 people who died when security forces clashed with gunmen in the community in July 2001.

The late MP for West Kingston Edward Seaga's promise on it reads: 'Justice demands that this must never happen again in Jamaica's future'. But nine years later, Tivoli Gardens experienced the 'Dudus incursion'.

Natoya Brown, 38, experienced both incidents. In 2001, she lost her sight after she was shot in the right eye at the corner of Regent and North streets. She had followed a friend home and was heading back when she got hit.

"I heard the first shot fire. I heard about two to three more after. That is when I feel my head start to shake. So I hold the two side of my head and called out for help," she said.

"When I fell to the ground now, I feel the liquid running down on me. I didn't realise it was the right eye fell out ... no one couldn't come to assist me, so I had to lie down on the ground and then I draw myself to a corner and someone came and take me to the Denham Town Police Station," she recalled.

With no police around, persons took her to Kingston Public Hospital in a handcart, which took some time.

"One of the times, I almost fell into a gully. I actually gave up. I thought that was it for me," she said. An operation couldn't save her sight, and Brown has been using 'false eyes' ever since.

Adjusting to her new normal wasn't easy, but the Tivoli incursion was more terrifying.

"That is when I was very scared. When it started, we started to hear crying and all those things and our phone started to ring off and saying that somebody died here and there and dead bodies there and so forth," she said.

Brown says it felt like the end and her fear was worsened because she couldn't see what was happening around her.

"We started to smell smoke and shot come through my windows. A shot came through the window, go through the fridge and go straight through the microwave. I get scared. When the shot came in the house, I start to cry and I call my daddy and I said 'shot a fire in a the house' and I run into the bathroom. It was very serious," she said.