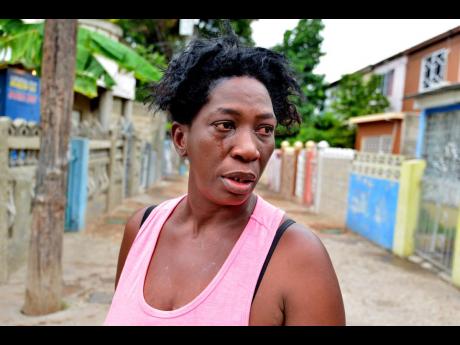 Marjorie Hinds cries as she remembers the events in Tivoli Gardens which left her spouse dead and her right arm crippled.

It has been 10 years since the infamous incursion, but residents of Tivoli Gardens continue to reel from the pain, trauma and bloodshed.

On May 23, 2010, the unrest began when security forces entered Tivoli, searching for Christopher 'Dudus' Coke, after the US requested his extradition.

The violence from the incursion claimed the lives of at least 73 civilians. A commission of enquiry did not lead to anyone being charged with those deaths.

Marjorie Williams said she watched as her two sons, 17-year-old Fabian, and 21-year-old Fernando, were dragged from her house and executed by police.

"They (police) said they wanted to take them out to question them and detain them, so I allowed them to take them out. Dem kneel dem down on the sidewalk and my sons kept crying and waving to me. The police kept telling me to go inside," she recalled.

Williams says she still ran outside to watch, as she strongly believed that her boys would soon be killed.

"I could see everything. They were crying for me and I hear Fernando seh 'Mummy, dem kill Pooksy' (Fabian) ... I hear when the shot go off. Him seh 'Save me nuh, save me nuh' but I couldn't come out because they (police) were inside the house preventing me from coming outside," a tearful Williams said. "Then they killed Fernando. I just hear explosions. I see when they throw Fabian in the trunk. They did not say anything ... they just packed up the dead people and carried them away. "The little money (compensation for damaged property) ... meant nothing to me."

Similarly, Marjorie Hinds has been walking around with pain for a decade. She lost her spouse as he was trying to help her get medical treatment.

"I was at Top Java and they dropped a bomb and it fling me in a the road. So him (her spouse) come take me up from out a the road and have me in a him hand," she said.

Police then detained him, and she said that as she was being taken to the hospital, he was killed at the same spot. Hinds said that she lost everything.

"Right now, me nuh have a dollar. Ina February 2020, dem give me $400,000 after 10 years. Me lose me babyfather, me shop, everything," she said. "The whole a me body did burn up. Sometimes me just a go market and all a drop dung. When the bomb drop, it fling me in a the road, me teeth dem lick out and me body bun up. Me just a come from doctor fi the same injuries from 2010."