Hefty fines, imprisonment for failure to self-quarantine or self-identify 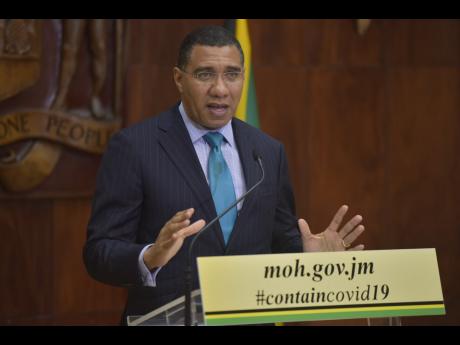 Persons who arrived in the country between March 18 and 23 and have failed to self-identify or self-quarantine could face fines of up to $1 million or 12 months imprisonment under the Disaster Risk Management Act.

The Prime Minister said that persons who came into the island and have not self-quarantined “pose one of the biggest threats at this time”.

“We have now made an Order to ask all persons who have come into the island between the 18th and the 23rd of March, that they must report using the website, jamcovid19.moj.gov.jmor call 888 ONE-LOVE and fill out or give the information required. The Order, as well, makes it mandatory that they quarantine themselves for 14 days starting from the date of their arrival,” he noted.

He said the Government also has the option of publishing the names of such persons.

“We have been very reluctant in publishing the list. We have been very cautious because we don't want to stigmatise people. We don't want to, in any way, trespass on the privacy of people, but we must also recognise that this is a public health crisis and the law does empower us to take action, but we can't, of course, abuse it. So we were taking every measure that would be considered reasonable in a free and democratic society,” he said.

Prime Minister Holness noted that Jamaican’s infection curve has remained relatively flat, while the infection curve in all the other Caribbean countries is rising, and exponentially so in some cases.

He pointed out, however, that the number of cases, now at 36, could drastically increase if persons arrive in the island with the virus and are walking about freely.

“We have had coming into the island close to 7,000 visitors and Jamaican citizens, of which approximately 1,500 left the island. So, we're still having a considerable number of persons who would have come into the island, who we cannot say with certainty that they were faithful to the quarantine rules, and, therefore, they are generally abroad in the society...They are within the country moving around and the challenge is that, this could be the precursor to community spread,” Holness said.