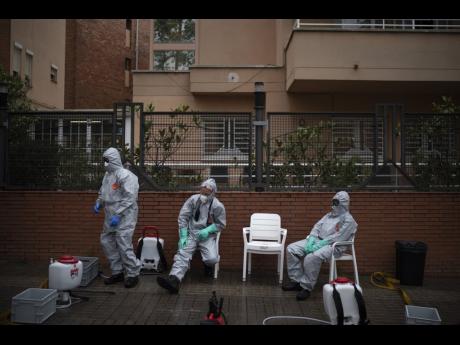 Firefighters wearing protective suits wait outside a nursing home before disinfecting it in efforts to prevent the spread of the new coronavirus in Barcelona, Spain, Monday, March 30, 2020. The new coronavirus causes mild or moderate symptoms for most people, but for some, especially older adults and people with existing health problems, it can cause more severe illness or death. (AP Photo/Felipe Dana)

MADRID (AP) — Bells tolled in Madrid’s empty central square and flags were lowered to half-staff in a day of mourning Monday in hard-hit Spain, while the top infectious-disease expert in the United States warned that smaller U.S. cities are about to witness the rapid acceleration in coronavirus cases that New York is seeing.

Dr. Anthony Fauci said on ABC’s “Good Morning America” that New Orleans and Detroit are showing signs that “they’re going to take off,” and other, smaller cities are “percolating.”

“What we’ve learned from painful experience with this outbreak is that it goes along almost on a straight line, then a little acceleration,, then it goes way up,” he said.

The warning came as virus deaths in New York surpassed 1,000, President Donald Trump extended social-distancing recommendations for a month in an abrupt turn around, and the outbreak pushed the health systems in Italy and in Spain to the breaking point.

Spain reported more than 800 new deaths, raising its overall toll to over 7,300.

Spain and Italy make up more than half the world’s death toll of over 34,800 people from the virus that has upended the lives of billions and devastated world economies. Hospitals are buckling under the weight of caring for so many desperately ill patients at once. Italy has by far the most reported virus deaths, at nearly 11,000.

Nearly 15% of all those infected in Spain, almost 13,000 people, are health care workers, hurting hospitals’ efforts to help the tsunami of people gasping for breath.

The U.S. now has more than 143,000 infections and 2,500 deaths, according to Johns Hopkins University, while around the world more than 735,000 people are infected.

Experts say the critical situations seen in hospitals in Italy and Spain will be soon heading toward the United States.