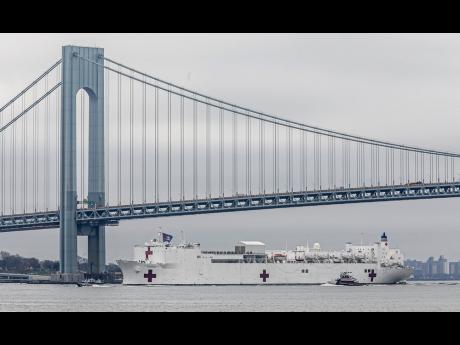 CORRECTS BYLINE TO BEBETO MATTHEWS, NOT SETH WENIG - The Navy hospital ship USNS Comfort passes under the Verrazzano-Narrows Bridge on its way to docking in New York, Monday, March 30, 2020. The ship has 1,000 beds and 12 operating rooms that could be up and running within 24 hours of its arrival on Monday morning. It's expected to bolster a besieged health care system by treating non-coronavirus patients while hospitals treat people with COVID-19. (AP Photo/Bebeto Matthews)

The number of reported coronavirus deaths in New York shot up by 253 in a single day to just over 1,200, a number Gov. Andrew Cuomo called “staggering.”

Cuomo sounded the mournful note even as a Navy hospital ship with 1,000 beds arrived in New York City.

State officials expect the number of deaths to continue to rise as the outbreak reaches its projected peak in the coming weeks.

“Whatever the numbers is, it’s going to be staggering,” Cuomo said. “We’ve lost over 1,000 New Yorkers.”

“To me, we’re beyond staggering already,” he said.

The state has already confirmed more than 66,000 cases, mostly in New York City.

There are 9,500 people in New York currently hospitalised for COVID-19.