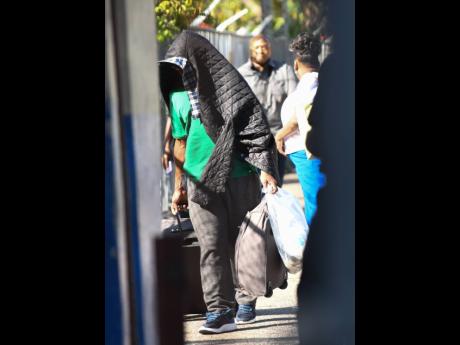 Deportees who arrived from the UK make their way from Harman Barracks in Kingston.

With open arms, Jane* tearfully embraced her son yesterday and walked with him to the car that was parked on the outskirts of the Harman Barracks in Kingston.

He was one of 17 ex-cons who were deported to Jamaica from the United Kingdom (UK).

Speaking to his mother with tears in his eyes, he said that the UK government had caused havoc in his life.

"They know what they are doing man, but I will be all right," he said as Jane hugged him again.

Before his return, Jane told THE STAR that her son left Jamaica when he was 12. Now 34, he spent nine months in prison for robbery and had been out for the past year getting his life back together.

"Only fi know seh last week Monday him call me and tell mi seh them a send him out," she said. She admitted that life would not be the same for her son, who has two young children.

"If we out yah find it so hard fi find job, you think a him dem a go give job?" she asked. "Wi affi mek it pan wi own. A my pickney and once me have life, him affi have life too," she said.

She believes that the ex-cons should have been allowed to stay in the UK.

"If you serve you time and in the country and not giving problem, why not keep them? If you know you never did a go keep them, why you never send them out from then? Why you mek them a readjust and then just grab them one day and ship them out," she said.

Similar sentiments were echoed by John* who was there to collect his brother who has been in the UK from age 16.

He said that his brother had been living there for the past 22 years and coming back is not going to be easy for him.

Claiming that the system is set against them, he lamented that his brother, who spent years in prison for what he considers a bogus rape charge, was treated unfairly by the government.

"It (his deportation) left his couple of-months-old baby and six-year-old girl over there crying for their dad and I'm really hurt about it because he is not a violent person," he said.

John told THE STAR that the family has been affected because his brother now has to start his life over in a country that he does not know.

"The UK policy is bullyism and racism. All the deportees, they are the ones in their country. Lifestyle creates these things that happen to these people because most them go abroad from they are children. So they are products of that society and I don't believe that after you have already paid the debt, they don't give you a chance to redeem yourself. What they do is kick you out of the country. You are a lamb to the slaughter," he said.