‘He beat me in front our son’ 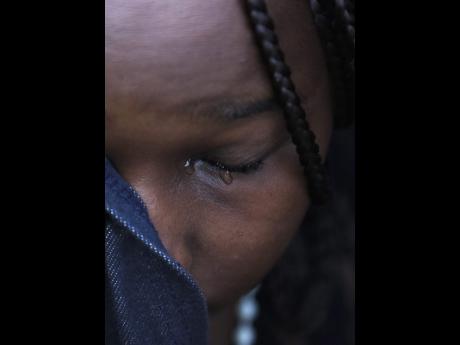 A 30-year-old Nicole Shaw* says her seven-year-old son has been left traumatised, after witnessing a cantankerous altercation between her and her common-law husband.

Shaw said her son stood watching helplessly, as she took several blows to the face. Her four-month-old son was asleep in another room.

She is now finding it difficult to look her son in the eyes as she is embarrassed about what happened.

“Me shame! Me baby fada beat me in front a we son and me caan continue fi live like this. Dis is obviously not a good ting fi kids witness … right now him look like him fraid a we. If me raise me voice, him jump,” she told THE STAR.

Shaw says this is the first time her spouse has raised his hands at her, and while she is distraught and disappointed in him, she is sticking by his side.

“God see and know … It grieve he heart! How a big sensible man fi lick him woman in front a him son? Weh yah teach yuh son right deh suh when yah gimme bare lick in a me face? Dis neva happen yet, I swear,” she exclaimed.

She said they had been arguing, but things got more serious when he started hurling not just expletives, but figurines and furniture at her.

“Me a run outa di house and a nuh fraid me fraid, enuh, a shock me shock. Me a move weh from di baby weh deh pon di bed and a try move from we big son, and him just a fling bare tings off a me. All di baby pram mash up now ova foolishness. Di fan mash up, centre table bruck, bare foolishness,” she added.

When THE STAR contacted her common-law husband, he admitted that he too was ashamed of his actions.

“Danette can tell yuh seh a di fus dis a happen … we argue nuff time but it neva get violent. Me nuh know a wah happen star. But me a go talk to me yute and mek him know seh dem ting deh no right,” *Joe Brown said.

He continued: “Me neva lick a woman in a me life before dis. Neva! Me nuh do dem ting deh! Me know she will forgive me cause a nuh me dat … She just vex sey all a dat happen in front a him and me understand dat. It come like something tek me ova.”

Meanwhile, Danette claims that the fight was instigated by her actions at a dance the night before. However, she does not believe that it warranted this type of behaviour from her man.

“Him wake up di morning and a cuss bout me a diss him and a wine pon man when me deh a dance. Him a wine pon gal in a dance but him wah me fi stand up stiff like me a statue … him know seh a regular thing, a just di dance vibes. Me a wonder if him did drunk,” she said.