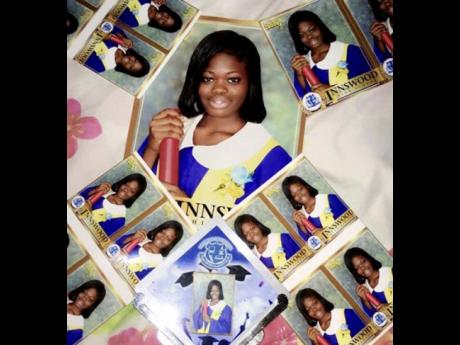 Kojiann 'Tokie' Braham, 17, always dreamed of becoming a practical nurse, but that dream disappeared when she died just two weeks after her high school graduation late in the summer.

She, along with her twin sister and some friends, left home in west Kingston to a spot in Clarendon for some fun.

But tragedy struck while they were on their way back home when the taxi they were travelling in crashed along the Salt River Road in Old Harbour.

Kojiann's mother, Cassandra Braham, told THE WEEKEND STAR that losing one of her twin girls feels like her heart is on fire.

"How yuh expect a mada fi react when she hear dat? It neva normal ... me run outta door and start bawl out help and nobody wasn't there to help me. Next week Thursday is my two children dem birthday and nobody know how me feel right now," she said, her voice shaking.

Braham said her other daughter suffered many injuries.

"She affi go do whole heap a medical checks. Right now she affi go do a full body scan ... something come up pon me baby neck, and a bare blood clots deh pon her foot dem," she said.

Kojiann graduated from Innswood High School and was to be enrolled at Distinction College, to bring herself closer to her nursing dream.

Karen Brant, the girls' aunt, flew in from England after hearing the news. She told THE WEEKEND STAR that her niece was in the hospital for three days and in much pain.

"She was up and down, from hospital to hospital, because of the severity of her injuries. The accident was on the Monday and she died the Thursday. When I visited her the Thursday, even though she was in pain, she was asking me if I was okay. That's the type of person she was. She was a joy ... she was lovely, caring, she was fun, she made people happy. I would categorise her as a rare breed ... she put other people before herself," she said.