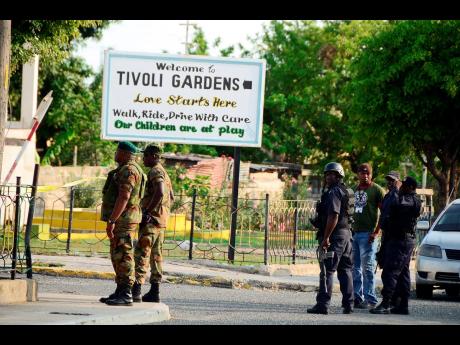 Gladstone Taylor/Multimedia Photo Editor The sign at the entrance of Tivoli Gardens.

Residents of Tivoli Gardens are content that they are no longer seeing the gruesome killings and violence that once plagued their community.

According to them, they are now witnesses to the Tivoli they have longed to see - a crime-free community that is ideal for people of all ages.

Odaine Harrison, a resident, told THE WEEKEND STAR that the people in the community have united.

"A peace and unity right now, nuh war nah gwan. Right yah now di place a run better dan how it did a run before. A true, one time people use to a dead and now nobody nah dead ... everybody jus a unite. Right yah now di place good, me nah tell nuh lie. Me love it. Nuh shot nah buss, di pikney dem can come out a night-time and romp ... daytime, anytime," he said.

He went on to say that residents no longer have to live in the crippling fear they have grown to accept.

"Yuh nah fi a walk and a look back a yuh. Yuh can walk free and hold yuh head straight, 'cause yuh sure seh nobody nah come fi yuh ... dem likkle tings deh. Tivoli is a likkle box weh people hardly come out of, but right now di yutes dem a come out and go look work 'cause dem nuh haffi a watch dem head back. Right ya now, everybody in a Tivoli Gardens love it," he added.

Harrison believes that while the community is experiencing peace, there is no need for the police to be so rigid.

"A bare things a keep. Wah day a two stage show keep. Right yah now the only thing me have a problem with a di police dem. Every time things keep dem wah lock it off and dem know seh a peace we say, nuh war nah go gwan. Dem jus love bad up di people dem, tru dem see the peace and know seh we a go tun pon dem. We nah go tun pon we one another."

Another resident, who goes by the name 'Nardo', says this is the Tivoli he has always wanted.

"Tivoli has been good so far. Everything just good and copacetic. No war, no robbery, no nothing. We have peace now. Nuh shot nuh fire recently, not even up the road me hear shot a fire - just peace. A long time nobody nuh dead and di soldier dem deh yah still, a try keep the peace," Nardo stated.

Unlike Harrison, Nardo agrees with the rigid actions by police despite this period of calmness.

"Better di police dem stay. Prevention is better than cure. Next thing the police ease up and di place flare up again. I don't have a problem with them. We need them to maintain the order."