News on the Go 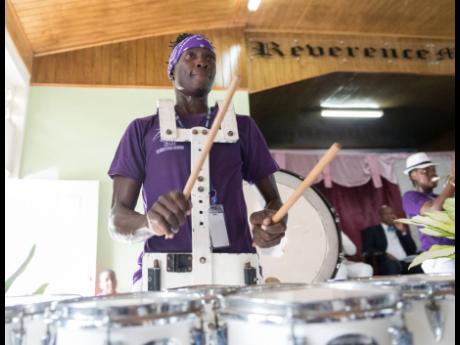 This member of the Eagle Star Marching Band drums away as his team paid tribute at Twayne Crooks’ funeral at Lionel Town Seventh-day Church in Lionel Town, Clarendon, on Sunday. Crooks, a Jamaican student-athlete, died from stomach cancer on September 1.

The Roaring River and the Rio Bueno could change colour this week, but members of the public need not be alarmed. According to the Water Resources Authority, the injection of the dye will be in the Cave River in Aenon Town, and the Mason River in Douglas Castle communities along the borders of St Ann and Clarendon.

The exercise is being carried out as part of ongoing hydrological investigations of underground stream flow in the Dry Harbour Hydrologic Basin (St Ann and Clarendon).

Dye tracing is the insertion of a dye to trace the flow path of a river which sinks and reemerges. The exercise will be conducted between Tuesday and Friday and may result in the rivers turning red, blue or green for up to 24 hours.

National Heritage Week is being observed under the theme, ‘Our Heritage…A Great Legacy’. The week began on Sunday and will conclude on National Heroes Day, next Monday.

“We will honour those whom we have recognised for their roles, beyond the call of duty, in serving the nation and our people with pride,” State Minister in the Ministry of Education, Youth and Information, Alando Terrelonge, said at this year’s National Heritage Week thanksgiving service at Calvary Gospel Assembly in Kingston on Sunday

Terrelonge, who represented Culture Minister Olivia Grange, said the theme summons all Jamaicans to unite, whatever their “race, colour, religion or creed”.

“It also urges us to accept National Heritage Week as a challenge to renew our efforts to safeguard the freedoms and rights won for us by our national heroes, and to respect and cherish the modern institutions they have decreed to the nation,” he said.

Horace McFarlane, a 44-year-old bus driver, was stabbed to death at his home in Long road, Portland, on Sunday.

According to the Portland police report, neighbours found McFarlane on his veranda, lying in a pool of blood, face down about 2:20 p.m.

McFarlane, who operated a minibus plying the route Port Antonio to St Thomas, was also known as ‘Froggie’. He has been described as a jovial and friendly person.

Thousands of persons are expected to converge on the National Arena on Heroes Day as the Jamaica Pentecostal Union Apostolic (JPUA) spearheads the celebration of 100 years of service to Jamaica by the movement under the theme ‘Together for Christ’.

Guest speakers at the event include Pastor Dawn Davis Lawrence and Bishop Dexter Edmund from the United Kingdom and Elder Nicholas Chambers from Jamaica, who are all products of the spiritual revolution kick-started in 1919 in Jamaica.

The day’s activities will see major figures within the Pentecostal arena receiving iconic awards for their spiritual leadership, philanthropy, social economic initiatives and contribution to the development of Jamaica.

The Pentecostal experience was brought to Jamaica officially in 1919 in Brown’s Town,

St Ann, by Missionary Jean Sappleton from the United States of America and has since expanded throughout the island with more than 600 congregations and hundreds of thousands of adherents of the faith.

Scammer gets three-year prison sentence in the USA

A Jamaican man is now facing a long prison sentence and deportation following his second conviction in the United States on charges related to a prize scam.

Kevin Palmer, 37, who resides in Suwanee County, Georgia, was sentenced last Friday to three years and 10 months in prison for using the prize scam to fleece an elderly couple out of US$320,000.

He was also ordered to pay US$321,342 in restitution to the elderly couple and warned that his legal status in the US is now in jeopardy.

“As a result of his guilty plea, Palmer’s lawful status in the United States may be revoked, and he may be removed to Jamaica,” the US Attorney’s Office for the Northern District of New York said in a statement announcing the conviction and sentence.

During last Friday’s sentencing hearing, Palmer also admitted that in 2010 he was convicted in New York for using a similar prize scam to fraudulently obtain money from persons who were led to believe that they had won the lottery or sweepstakes.

He was given a 90-day prison sentence for that crime.