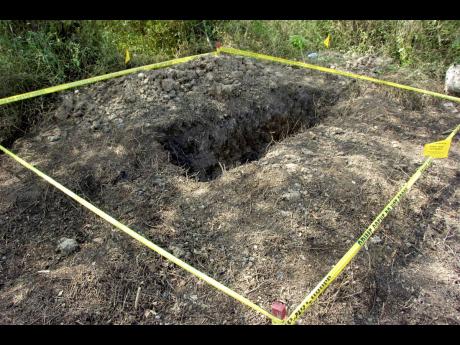 A 26-year-old man said that he was “battered, bloodied and left for dead” last Wednesday, when he was buried in a shallow grave.

The man, who was found in a grave in a Kingston community, is now recovering in hospital.

Brown said that he was miraculously rescued last Thursday by a passer-by, who heard moans coming from the ground.

Brown said that since the incident, he has been in pain and is finding it difficult to sleep at nights. He suffered a broken jaw and a fractured hand.

“I can’t sleep at nights without getting jook (injection). I know this attack is something personal. I keep on saying that it is one person do it but based on my injuries they are saying is more than one person do it. But I don’t know because the first lick I get is to the back of my head,” he said.

Brown, who is gay, told THE STAR that he fears for his life because he believes that the person who attacked him was his former lover who is trying to protect his image.

He said that while he was in the grave, he thought that he was dead.

“It is like I died and God gave me back life. Right now my mouth is twist and my eye could not open but it is opening now. I am just so afraid because if the hospital discharge me now, I wouldn’t have anywhere to go,” he said.

Brown’s cousin said that no one deserved to be treated in the way her relative was.

“Someone called me and asked if I heard what happened to my cousin and I said no. The person sent me a picture and a video of what happened. When I saw it, I almost passed out. In all my life I’ve never seen anything like. This is beyond gruesome and it’s barbaric. Even if he was not my relative, it is still wrong. How can you beat a person like this?” she said.

She said she believes her relative was beaten because of his sexual preference, as weeks earlier, he was wrongfully accused of spreading rumours about his escapades with a ‘community don’.

“The person texted my cousin and told him to meet him at a spot. When my cousin went there, there were more men there waiting on him. They beat him up, probably thought he was dead, and they buried him,” she said.

Superintendent of police in charge of Kingston Central, Robert Gordon, said the police received reports that an individual was buried alive in a section of the division.

“We heard of the incident and as you know we had to investigate, but we saw no one there. We are however still investigating,” he told our news team.