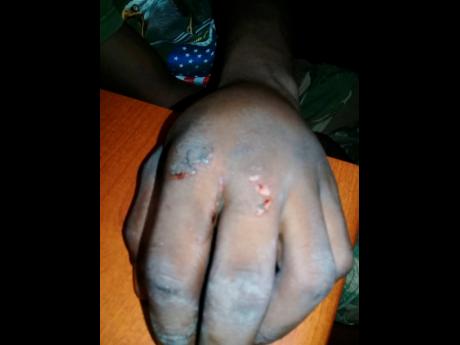 Smith’s son shows the bruises he received on his hand.

When Clinton Smith saw the video of his 15-year-old son, Ricardo, being beaten by a taxi man, he was furious. His anger escalated when he saw the bruises on his son's face and arm.

"What I heard happened was that this guy comes at a speed to the point where he hit my child on his hand, broke off his rear view mirror. My son proceeded to walk the same way because I'm always telling him, 'walk away from trouble'. This guy comes out of his car, grabs my son by his back pack while my son was still walking away, and seh: 'My yute, yuh nuh see yuh bruk off mi mirror', and my son in turn said to him, 'Why yuh come over so far on the right'. And after accosting my son, he then pulled out his belt and hit my son," he told THE WEEKEND STAR.

"My son has a bruise a little to his eye cause he hit him with the buckle," he added.

Smith said that he reported the matter to the Spanish Town police, but is yet to see any form of justice being done.

"I press charges, and nobody can find him. I find that so hard to believe. I don't think the urgency to get this guy off the streets is enough," he said.

Smith said that the incident has drastically affected his son.

"My son is in pain. That's demoralising, and that could be something that could scar him for life. Because no matter what you do to a body, it heals, but mentally it never goes away," he said.

Smith explained that corporal punishment is not something that he'd administer on his child.

"I would spank my son when he was younger, but now he pass that age, so we talk," he said, adding that he would never use a belt buckle, or beat the child in public," he said.

Efforts to get a comment from the police regarding the matter proved futile.