News On The Go 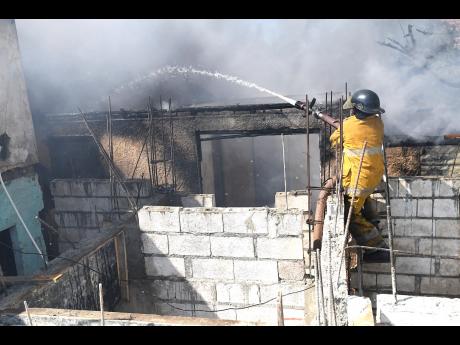 Ricardo Makyn/Chief Photo Editor A fireman works feverishly to put out a fire at a property located at the intersection of Windward Road and Bray Street in Kingston last Friday.

One man was fatally shot during a confrontation with a licensed firearm holder on Sundown Crescent, Kingston 10, on Monday.

The unidentified man is of dark complexion, slim build and is about six feet tall. He was clad in a black pullover, grey pants and a pair of red shoes.

Reports from the Half-Way Tree police are that about 9 p.m., the licensed firearm holder and another individual were walking along the roadway, when they were allegedly held at gunpoint by the unidentified man, who proceeded to rob them. A confrontation ensued during which the assailant was shot. The police were summoned and the man was taken to hospital, where he was pronounced dead.

Health Minister Dr Christopher Tufton says 10 additional workers will be employed at the Trelawny Health Department's Vector Control Unit as the ministry steps up efforts in destroying mosquito-breeding sites in the parish.

"We are expanding the temporary work staff. We will be moving from 40 to 50 Housing, Opportunity, Production and Employment Programme, as well as Ministry of Health (Vector Support Programme) personnel, who will be working alongside the 10 permanent workers. They will be deployed in critical communities like Albert Town, where there is a high number of Aedes aegypti breeding sites," he said.

He said that the additional workers will be "mapping the town centres to create awareness among citizens, in order to get them to participate (in the eradication of mosquito-breeding sites)".

Fifty-year-old Winston Pinnock of Reckford district, Clarendon, died as a result of injuries he received in a motor vehicle collision on the Dam main road on Monday.

Reports from the Crofts Hill police are that about 5:30 p.m., Pinnock was driving an Eagle motorcycle along the main road, when on reaching an intersection at Darkness district, he allegedly collided with a Mazda station wagon. He was thrown from the motorcycle. He was taken to hospital, where he was pronounced dead. The other driver was treated and released.

Tourism Minister Edmund Bartlett is encouraging hoteliers to tap into the niche market of special-needs tourism and provide services to members of the disabled community.

Speaking at a recent JIS think tank, the minister said that some of the small hotels that are not competitive in the landscape could very well morph into specific areas for special needs tourism.

He pointed out that the Ministry of Tourism has been pushing special-needs tourism in Jamaica and has been having talks with these hoteliers.

"Special-needs tourism is one of the new and exciting areas that have potential in Jamaica," Bartlett said.

He noted that Jamaica's tourism industry is segmented, and a whole range of tourism experience exists for persons with disabilities.

"We're looking at how we can help fund and retrofit some of these smaller hotels in the context of the small and micro tourism enterprises ," Bartlett said.

The National Solid Waste Management Authority (NSWMA) is to construct four new garbage-transfer stations in the parishes of Westmoreland, Trelawny, Clarendon, and Portland.

These will serve as areas where trucks can deposit solid waste prior to loading on to larger vehicles for transporting to disposal sites.

NSWMA's executive director, Audley Gordon, told JIS News that a consultant has been engaged to look at the design and bill of quantities for the station in Trelawny.

Once a submission has been made by the consultant, the proposal will be screened then assessed through the Public Investment Management System before approval is given for construction to begin.

Gordon said that the transfer stations, which will have large collection bins to temporarily hold approximately six truckloads of garbage each, are expected to reduce the cost of transporting waste to disposal sites.

Currently, garbage trucks travel more than 50 miles from Negril, Westmoreland, to Retirement, and 40 miles from Rocky Point and Kellits in Clarendon to Mandeville, Manchester, to dispose of their load.

The Mulvina White Early Childhood Centre on Slipe Road in Kingston has received much-needed assistance from the Key Club at the Wolmer's Boys' School to improve the institution's infrastructure.

The club, which is part of the Jamaica Key Club District, has been working with the early childhood institution since 2016. Over the past two years, the club has donated stationery, such as exercise books and pencils, and contributed community service hours to the institution, where they read to the children.

Recently, through a project, several of the young men who are a part of the club installed ceiling fans and repaired electrical outlets at the institution.