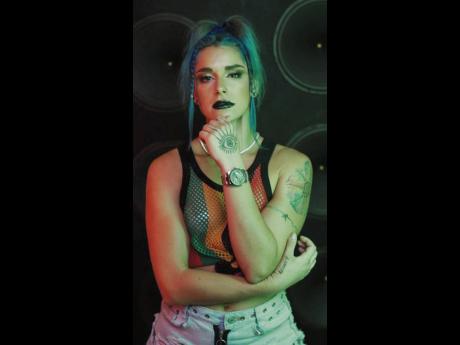 The German-born artiste came to Jamaica to study dancehall music two years ago and through a series of extraordinary events, is now releasing her debut single, Brand Me a Rebel.

"The song is basically saying 'I don't care, go ahead judge me, this is my life and I'll live it how I want it'. Everyone is the creator of their own happiness, and that is something I wanted to convey with this song," said the artiste, whose given name is Lilie Gorchkov.

She said the song calls out anyone who has ever made a preconceived judgement of a woman solely based on her appearance.

"Yea, the song is a criticism of the way people often judge others, especially women for what they wear, how they act, and especially when women are on the way up in their career ... they experience a lot of judgement. And most people don't see you as a person or care to understand what you went through, so this song is for them," the effervescent 23-year-old said.

The single will be officially released this month on the After 13 Music label. She will also be releasing visuals for the song next week.

She loves working with local beat makers and artistes to blend her Eurocentric pop stylings to dancehall and world music, and craft an authentic new sound.

"In Germany, in music school, I had recorded songs but I never got to record my own songs. But here in Jamaica, I met the right people, showed them my songs and they were like 'just do it, let's go'. I love Caribbean music and dancehall. The music I am doing is pop-oriented because of my influence from Europe. But I am very excited and curious about what the future brings," she said.