Timezone wants to take freakiness to the next level 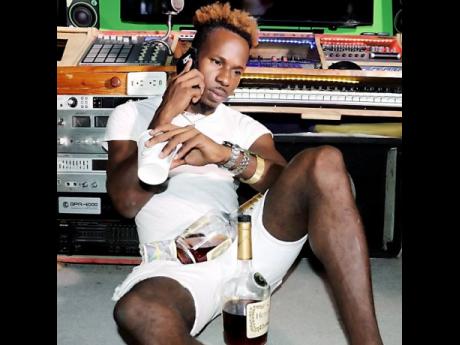 In her recent remix of Cardi B's WAP, Ishawna declared that when it comes to admitting that they give oral sex, most Jamaican men 'have a shy face'.

But there is nothing shy about up-and-coming dancehall artiste Timezone, who has boldly declared in his most recent single, Top Freak, that 'the sweetest part a mi life a when she put the p***y inna mi face'. In an interview with THE WEEKEND STAR, the entertainer unashamedly proclaims that he has come to 'unlock a new level of freakiness in dancehall'.

"There is space in dancehall for everybody ... so there is definitely a space for freaks. Music is changing and we affi change wid it. Memba if Kartel never come out and say freak, nuff people woulda still a bun out all things freaky," he said. "Right now all me a come do is take freakiness to the next level. When my song work, every artiste soon start run wid dis and see say no one cares about this anymore. Yuh do weh you want in a yuh bedroom and bold wid it." Despite his optimism, Timezone says he is well aware that many men will 'bun him out' first.

"Everything you do in life, good or bad, always have a consequence, so before I even release this song, I know that di man dem nah go like it because Jamaican man grow up fi say dem nah 'go under' woman. Dats what in a dem head and honestly mi nuh even care bout dem," he said. "Mi do music for the ladies. So if dem want to bun it out, that's there thing. But mi know the main one dem who gonna bun it out, a dem a do it and have been hiding. A di secret freaks, a dem a go bun it out."

When asked if the song is just his way of gaining people's attention, or if he really does practise what he preaches, Timezone neither confirmed or denied whether he partakes in oral sex.

"No woman nuh want a boring man in bed so let's just say I'm not boring. I do the things to please my woman. If you don't please your woman, somebody else is going to please your woman for you," he said. "This is a ladies' song. The song has been released one week now and di woman dem love it like crazy. If you see some of the comments, you would think that I already buss and out there. Once the woman dem decide dem love yuh, a it dat fi yuh as an artiste. Dem deh pan my side so mi good. I'm an underground artiste that nobody really knows and since the song release my followers are climbing every day and everything is just going good and so I feel the song is gonna buss me."