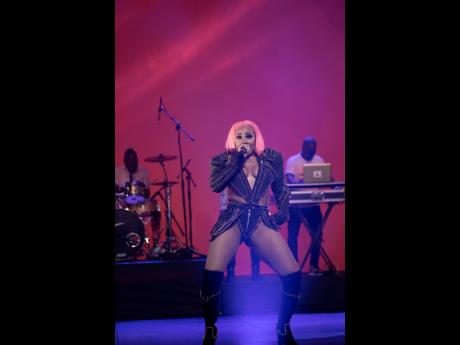 " F rom yuh say freak, you call mi name, mi nah no shame. Me coulda never complain," are a few of the bars Ishawna spits in her "refix" of Cardi B and Meg Thee Stallion's raunchy hit single, WAP.

"When I heard the song, I felt it was only right that I jump on the track and do the refix. It's more than just the fact that it's a freaky song. I love that it's two women being confident and embracing their sexuality because that's me. That's what I represent," she said. "I wouldn't say I'm the 'queen for freaks' but I am the queen for people who are confident and comfortable with themselves and their sexuality. I represent for the people who are doing whatever the hell they want to because dem nuh affi answer to nobody. A your life, do weh you wah do." Pointing out that she anticipates the usual 'moral lashing', the Equal Rights artiste made it clear that "anything mi do mi embrace it".

"Mi nuh do nothing and hide it or nothing and shy away from it so once I say I'm going to do something, I do it all the way. I never back out. If you're a freak, so what?" she questioned. "Life supposed to festive. A mi say festive queen enuh, so weh boring life a go? Life is too short to be boring. Yuh nuh see how 2020 a gwaan?"

Ishawna told THE STAR that there is always a double standard in society when it comes to women speaking openly about the sexual acts they enjoy partaking in.

Ishawna posted her WAP remix on her official Instagram page, and gained more than 200,000 views in less than 24 hours.

She was trending number one on Twitter on Sunday night. The track caused so much buzz that it even gained Cardi B's attention.

She reposted the track in her stories on Monday with the caption, "fireeee Jamaicans. It's too nasty".

Ishawna said that was a good look for dancehall, Jamaica, and the music overall.

"I feel like the remix is making everyone have fun and that's what it's about at the end of the day," she said.