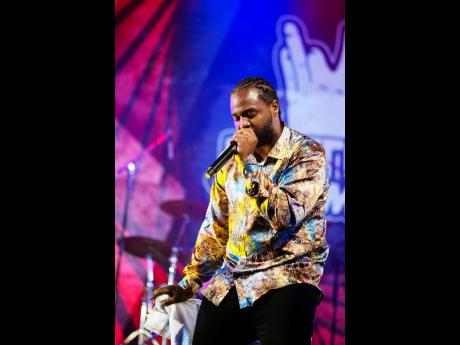 Still reeling from the devastating loss of three of his close friends, dancehall artiste Teejay has vowed to keep pushing towards his dreams in a bid to honour the memory of his fallen friends.

Speaking with THE STAR in his first interview since last month's tragic incidents, Teejay says he is now more motivated than ever to make it in the industry.

The Uptop Boss' friends, Grimey, Afro and Snow, who he said were some of his biggest supporters, all died as a result of gun violence.

"When somebody pass on, we can't do nothing fi bring dem back innu, so we affi just move forward. Me can't sudding and just rest pan dat fi like two, three months, because a my career dat a go go down the drain, and is like my fren dem woulda dead knowing say dem did wah me do good and me just stop," he said. "If me do dat, is like dem a go turn inna dem grave, so me affi just continue push forward and understand say this is what life is about. We live to die. We affi dead, but it's what we do while we living dat a go make our life different. Me affi set a legacy, work towards it, and make sure we nuh live in vain."

Teejay also sought to silence the continued criticism that he made the wrong choice joining the Romeich Entertainment team.

Teejay told THE STAR that he refuses to listen to chatter surrounding label choices, as he is well aware of who will do their best to help him accomplish his musical goals.

"Romeich believe inna me and my thing, so me believe inna Romeich Entertainment. The world tricky innu, because me memba when me deh a MoBay and me used to pree wid me fren dem say is a man like Romeich fi have mi career, and it just end up das me forward a town and the dawg see mi thing and say, 'Yow, yuh bad yute'. A Romeich see mi talent and me affi respect him fi dat, so mi nuh listen when people a talk, cuz dem never seet," he said. "How das a when Romeich seet, and unu recognise say him seet, unu a go say a di wrong thing me do? Why unu never make the push and gimme a strength? Me can't pay people mind innu , because dem nuh normally believe inna weh yuh can do until you believe inna yurself and actually show dem say yuh can dweet."

Teejay said failure is not an option.

"A five kids deh yah fi me, mi can't stop dis. Mi can't make dem know say daddy did a do dis and give up, because dem a go come grow fi be a failure, too. Me affi set example fi dem. Dem a my motivation," he said.