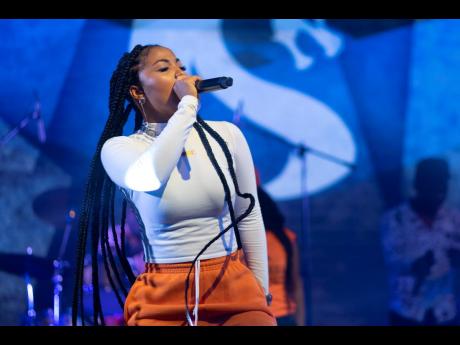 When she graced the stage at last Friday's virtual staging of Reggae Sumfest's dancehall night, Shenseea declared that after not performing for five months, she is more than ready to jump back into the thick of things.

In a post-performance interview with THE STAR, the dancehall princess says although it is uncertain when she will be physically able to connect with her 'Shenyengz' (fans) again, she will have lots to offer in terms of new music.

"I have been spending a lot of time in the studio, putting my thoughts and feelings into songs and so my Shenyengz have a lot to look forward to, trust me," she said. "I think everything happens for a reason, even if it's a global pandemic. I really feel like COVID-19 came with the opportunity for growth for a lot of us even if we didn't see it in the beginning. What this time away from the stage has done is give us time as artistes to spend perfecting our craft, developing our writing skills and explore even more in the studio. I had songs before COVID and den me spend so much time a write during COVID, me have even more songs."

During the lockdown, Shenseea has released two tracks, Wasabi and Good Comfort. Before that, she saw much buzz with the single, The Sidechick Song.

Two months ago, the entertainer asked her 2.5 million strong Instagram following if they were ready for her to drop her debut album.

When THE STAR quizzed the artiste about the likeliness of that project manifesting, she said with all the new material she has coming, the world would just have to wait and see.

In addition to new material, the entertainer says she has been working on improving her live performances.

"It's always a crazy vibe when I'm with my Shenyengz and over the past few months, I have been thinking a lot about what I can do to make being with them better once we reconnect. The first few shows I do when all this is over nah go be nothing normal," she said.

Shenseea says being grounded has also allowed her to spend quality time with her four-year-old son, Rajeiro.

"I have been in the industry now for four years and he's four years old. I have been on the go non-stop and so I haven't been there with him the way I would have wanted to. To just take a break with him and relax and see how amazing he is, how sweet he's growing and how smart he is, it has brought me back to when I just had him. Because when I just had him, I spent lot of time with him and so I've been enjoying quarantine," she said.