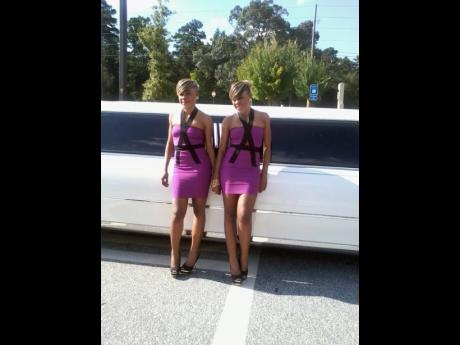 The dancehall twin sister deejays, Kaydine and Kerrine, better known by the stage name K Queens, have put forward their take on Trinidad Killa’s single Gunman In She Hole.

“We heard the song played at a couple parties. Hearing “ gunman in she hole, she like that” made us think, females don’t want no gunman, but every female want a rich or financially stable man,” Kaydine told THE STAR.

She said that it was all fun and games dancing to the song, but the reality hit that females are being killed by abusive men.

“We wanted to answer back and be the voice for all females. We are not promoting prostitution, or for woman to sell themselves or be dependent on a man, but challenging them to look for a man that is ambitious,” she said.

K Queens first performed the remix, Rich Man In Mi Hole, on the Welcome to Jamrock Cruise, when Bounty Killer invited them on stage, and again at Unruly Fest; both events were held last December.

Lampshade Muzic created a new rhythm for the artistes to record the track, while Bounty advised them on the direction of the lyrics.

“When we were writing this song, Bounty Killer made sure we set it a way, and especially knowing him nuh support certain things, he guided us along so that it was clear that we don’t want females to sell themselves for money,” Kaydine said.

The deejays, who are based in Atlanta, say they are exploring digital means of promoting the track and have even launched a challenge.

Kerrine, the quieter of the twins, said, “We haven’t had much chance to do on-the-road promotion, but the music video is out and we doing what we can on social media. We just put out a challenge to the person who is the most creative with the song, knowing the lyrics as well, to have a chance to win US$300.”

“It’s a hard time now, and in getting the song out there, we are also trying to help someone who needs it. Atlanta is like a ghost town, can’t imagine what it is like in Jamaica; hopefully, this challenge can be some fun for our fans who are quarantined or isolating themselves at home,” she continued.

She said that there is no competition with the original track.

“Let us be a voice for females because, believe it or not, we all want love at the end of the day. But if the landlord knocks at the door you can’t give them love – time for us to be serious and independent,” she said.