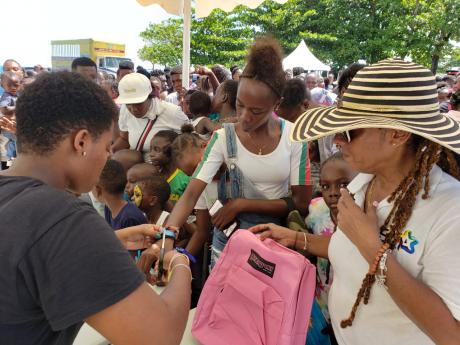 One armband equaled one school bag with school supplies. 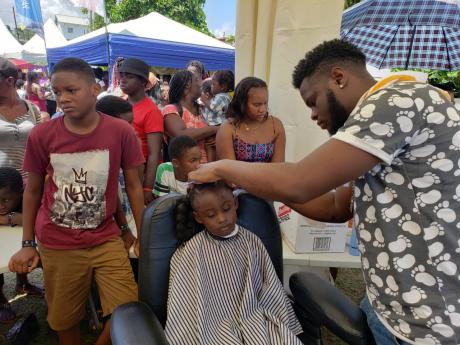 A young boy gets a line up from the barber service provided at the treat.
1
2

Though known for his unruly moniker, the Popcaan Off to School Treat hosted by the popular artiste, maintained a disciplined system that would ensure the first 700 children who entered the Rudolph Elder Park in Morant Bay, St. Thomas got various supplies.


And though some of the excited youths and their parents tried to breach the barriers that were set up by volunteers of the Popcaan Care Foundation, several security officers including members of the Jamaica Constabulary Force, managed to control the anxious crowd and steer armband-wearing children to the established queues.


Children who weren't able to secure the school bags, which were packed with books and other items, were treated to pencils, sharpeners and rulers.

Several rides were available, and there was a refreshment centre where attendees were offered drinks and water.


The boys also had access to free haircuts being done by barbers, who were on location.


Among the hundreds who received supplies were two of Doneilla Davis' three children.


"The treat has been going good so far and my children dem glad for the two likkle bag dem. Is really three of dem but mi satisfy with the two because nuff pickney here nuh get any" Davis said.


Lauding Popcaan for his philanthropy, Davis said the treat is a good move by the artiste, and one that is really appreciated by the people of St. Thomas.


According to her, "He is really doing a great job because nuff children benefit out of it the two year dem."